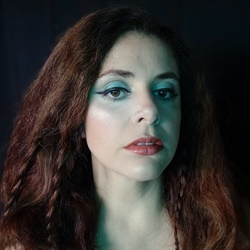 Buy a Coffee for
Psamathes

Buy a Coffee for
Psamathes
Upgrade my computer
8% of goal

I've had the computer I produce music with for many years now, and it's starting to show. I'd love to upgrade with a newer and faster rig so that I can produce better music for you all!

Psamathes is a singer and songwriter based in Rome, Italy. Her wide range (G#2-G6, almost four octaves) and vocal versatility, combined with a unique voice colour, allow her to record in a variety of styles and genres. She is known for being able to switch from powerful high belting to soaring operatic vocals, from soft, intimate interpretations to atmospheric folk chanting and even heavy metal growls, all while singing in more languages than she can count - even made-up ones! Her vocals can be heard in Original Videogame Soundtracks such as the one for the upcoming Cyberpunk turn based rhythm RPG "Keylocker" and on the one for The Pathless, composed by Austin Wintory. Her vocal versatility has been harnessed for Kontakt Libraries such as OMEN by Silence + Other Sounds. Psamathes also arranges vocals for solos and choirs, and writes lyrics in different languages (English, Italian, Latin, conlangs). She often records entire 4-part choirs on her own, thanks to her command of range and tone. She has over 10 years of training and experience performing with choirs, as a solo act, and with bands, and she is a light lyric soprano who trained with, among others, renowned soprano Marinella Meli. Her own original songwriting is as varied as her singing, drawing influences from dark folk, orchestral, electronic, and heavy music, with lyrics in a phonetics-based conlang she created that delve into human emotions beyond words. Active member of the videogame music community, from Pixel Mixers to OCRemix, as well as former Executive Producer for GameGrooves Music she regularly contributes to tribute albums and singles, while working on arrangements for her YouTube channel, independent releases, and as a session singer.

Welcome to my Ko-fi Page. If you enjoy my voice, my music or my puns, please consider supporting my work! Grazie mille :)

Your Ko-fi gallery will be visible to others once you add images.