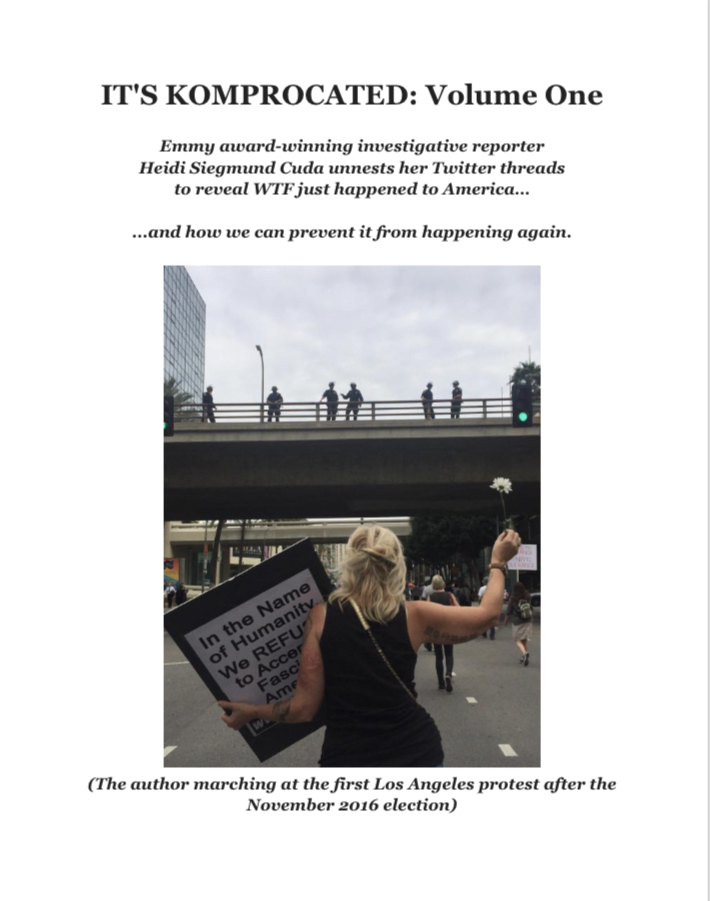 IT’S KOMPROCATED: Volume One (9/2016 - 4/2019) Emmy award-winning investigative reporter Heidi Siegmund Cuda unnests her Twitter threads to reveal WTF just happened to America… and how we can prevent it from happening again. Volume One is a 248-page PDF book compilation of Cuda's political writings from 2016 to early 2019, revealing the evolution of her work, from mom blogger who had retired from a career in news, to a return to her roots as a high-profile, investigative reporter. The title, “It’s Komprocated,” is one of Cuda’s portmanteaus, a blending of “kompromat”and “complicated.” The first 100 people who bought the book, which reads like a Resistance diary, were invited to a Zoom salon with the author and her friends in December. **** 12/19 UPDATE: The first Zoom party took place 12/11, and was a blast! Next 35 people to buy book or donate at the $15 level received an exclusive invite to next Zoom party on January 8 to kick-start the New Year! Planning Spring Party next! **** Author Bio: Veteran investigator reporter Heidi Siegmund Cuda co-authored such books as: * The Ice Opinion, with Ice T * Got Your Back, with 2Pac’s bodyguard * Definition of Down, with Darlene Ortiz And authored: * Crazy Fool, about Bradley Nowell of Sublime * Warped Book, about the Vans Warped Tour In January, she launched a new publishing company, Coral Winds Media, and the debut book, "A Wretch Like Me," is a shocking true story about dire hunger, which has received incredible 5-star reviews. www.amazon.com/Wretch-Like-Heidi-Siegmund-Cuda-ebook/dp/B09QZ1NJC8/ref=sr_1_3 In November, she launched “RADICALIZED Truth Survives,” an investigative show on disinformation with Jim Stewartson, High Fidelity, and Sean Conner. View episodes and subscribe here: youtube.com/c/RADICALIZEDTruthSurvivesPodcast Currently, she reports on American politics for Byline Times, and her recent long-form investigative reporting can be viewed at: bylinetimes.com/author/heidicuda and bylinetimes.com/author/sianandheidi. Thank you so much for supporting independent journalism! 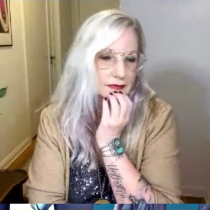 Other Items in Heidi Cuda's