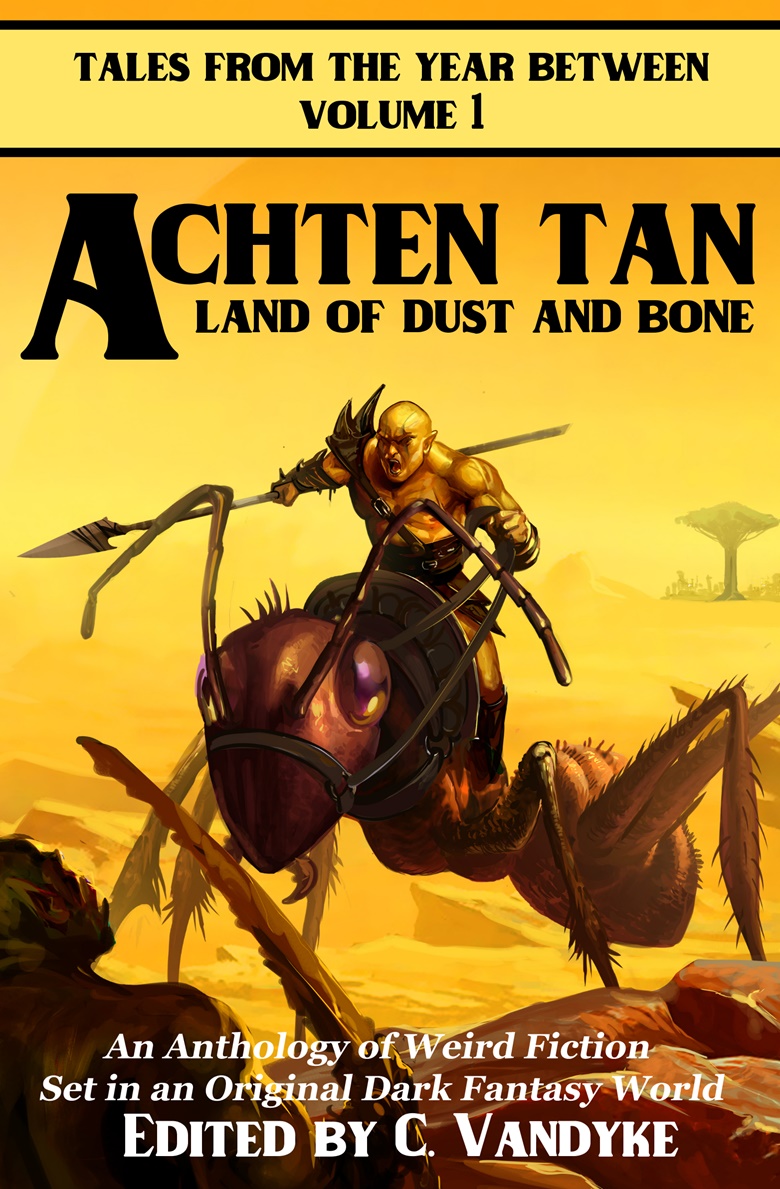 At the crossroads between Mieville’s New Crobuzon and M.T. Anderson’s Viriconium, on the border of Dhalgren and D&D, just to the left of Terry Pratchett’s Discworld and Mad Max’s Fury Road … lies Achten Tan Tales from the Year Between is a biannual anthology that brings together some of the most talented writers from around the globe to invent an original world from scratch, then explore that world through their writing. After a week of intensive world-building, each author sets out to expand their new, fabulous universe through short-stories, flash fiction, poems, songs, and whatever other genres their boundless imaginations unleash ... In this inaugural volume, the world in question is Achten Tan, an at times brutal and at times humorous city located at the foot of the Godtree on the southern edge of the Bonewastes. Home to giant ants, mysterious mirror fragments, and the world’s greatest barbecue rib joint, Achten Tan is bursting with stories of fantasy and wonder. One part Italo Calvino, one part Frank Herbert, with just a dash of George R.R. Martin and L. Frank Baum Warning. Achten Tan: Land of Dust & Bone is weird. Inside its pages are drama and humor; action and longing; violence, death, and love. It’s strange and beautiful, a living instance of the old aphorism regarding the whole being greater than the parts. Oh, and there are also giant ants and a city obsessed with barbecued ribs. There are poems and short stories, one-act plays and flash fiction, epistles and excerpts from academic texts, erotic tales and even recipes. It’s a wonderful, fabulous, bizarre, and exciting mix of fiction. Learn more about Achten Tan and Tales From the Year Between at YearBetween.com. You can sign up for our Mailchimp newsletter or follow us on Twitter and Instagram. You can learn more about the publisher, Skullgate Media, at Skullgatemedia.com (Contains contributions by the following authors: Gabrielle Awe, Jesse Nolan Bailey, Ian Barr, Darius Bearguard, Jonathan Beck, Kyle Beers, Dan Berison , Benjamin Blattberg, Elvira Canaveral, Gregory Coley, Darby Cupid, Chris “Terry” Durston, Diana C Gagliardi, Erin Rae Hoffer, Sarah Houck, Debbie Iancu-Haddad, Roger Kristian Jones, Vincent LaBate, Allison Moore, Iseult Murphy, Chapel Orahamm, S.L.Parker, Sarah Remy, Rosalind Dando, CD Storiz, Imelda Taylor, Chris Vandyke, Kelly Washington, and Paul Worthington. Maps by Aaron Hockett)

Other Items in Skullgate Media's