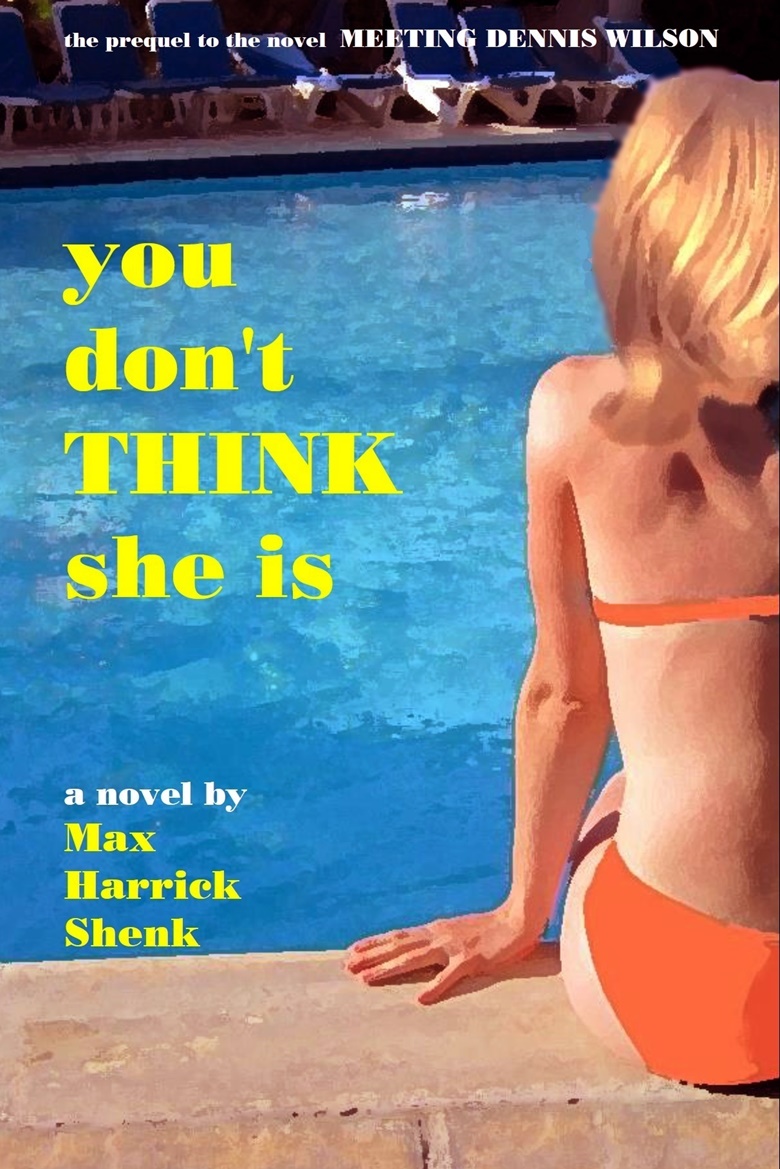 Three friends. Two girls. One guy. "Margo was my best friend. I felt like it had already been decided for us. I always knew where I stood with Margo. Christy (and other girls) somehow seemed to be hiding something, or making some joke I wasn't privy to, but when Margo said 'Hi,' I didn't find myself wondering what she was really saying. "I liked Margo, and I trusted her. I didn't know if I liked Christy. "I something'd Christy, but I had no idea what that 'something' was. "Yet." The prequel to the novel MEETING DENNIS WILSON, YOU DON'T THINK SHE IS tells the story of how Brian, Margo, and Christy became friends and something more... or less, depending on your perspective. READ EXCERPTS FROM THE NOVEL HERE: maxshenkwrites.com/category/you-dont-think-she-is-excerpts REVIEWS: -------------- "YOU DON'T THINK SHE IS by Max Harrick Shenk reveals a brilliantly composed coming of age novel... The short chapters speak volumes about the notion of first love, the workings of puberty, and the understanding of a blossoming sexuality ...(and) give the reader a keen insight into each of the character's youthful thoughts and ideas... Shenk's book will take any reader back in time to their emotions and explorations during middle school. It is reminder of the innocence of youth and the burgeoning feelings of desire." --Kathy Buckert, www.kathybuckert.com "Though it's actually a prequel to the previously released MEETING DENNIS WILSON, YOU DON'T THINK SHE IS, the second offering by Max Harrick Shenk, works well as a standalone novel all on its own... Bolstered by intimate handwritten correspondence (letters, postcards, etc.), Shenk's engaging tale is largely character driven, and he does a commendable job of making the characters likeable and intriguing enough to gauge the reader's sustained interest." --Erin Langston, Apex Reviews "In one sense this is the story of three people: Brian, who is telling the story, Margo, his best friend, and Christy, the one he develops a different sort of attraction for. In another sense this is the story of two boxes. One box lay on the top shelf in Brian's closet and the other in Margo's room. Every night they both took all the scraps of paper, notes the other kids gave them, and whatever else was in their pockets, and dropped them in their box, forming a chronological record of their lives. Brian is using the contents of the two boxes to tell their story. The reader is even shown many of these notes and things, as an intriguing way of advancing the story and making the readers feel that they are somehow intricately involved in the events... YOU DON'T THINK SHE IS follows all the trials and tribulations [and] wonders of growing up, plus the awkwardness of gradually becoming aware of sex, and the difference between a best friend (Margo) and a girlfriend (Christy), which leads to confusion as this distinction blurs. This is an excellent read, definitely of five-star rank. The writing is smooth and easy... I highly recommend it and hope that, as a result of enjoying this book, you will discover things about your own childhood." ~ Charles Adamson, PhD, Miyagi University, Tokyo About the Author -------------------- Max Harrick Shenk is a writer who earned his MFA in the creative writing program at Goddard College. YOU DON'T THINK SHE IS is his second novel, set in the fictitious town of Quaker Valley, PA ("Like Gettysburg, but nothing happened here"). He's a native Pennsylvanian currently living in Central Vermont. THIS PDF E-BOOK EDITION IS IDENTICAL TO THE PRINT AND KINDLE VERSIONS, AND IS READABLE ON ANY DEVICE WITHOUT LOSS OF FORMATTING.

Other Items in Max Shenk's